Performance sensors for a racing wheelchair 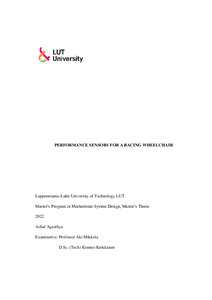 Because of the relevance and popularity of paralympic wheelchairs, players and coaches have been focusing on a variety of performance enhancements. The athlete's performance or the equipment they utilize, in this case, a racing wheelchair, can be measured. Performance is often quantified using a variety of characteristics, with a concentration on power measurement.

The purpose of this thesis is to investigate the application of a Quarq Dzero Dub cycling power meter in a racing wheelchair. The power meter is a crankset power meter that measures a rider's torque input and converts it to power in Watts.

A thorough literature analysis reveals three approaches for measuring power in a wheelchair that were not used in this thesis. The power measuring idea employed in the study overcame its limits, which were not relevant to the research problem of this study. A comprehensive design procedure was conducted where all parts were designed according to the size and criteria of the power meter in a full design method using Solidworks 2020. This was followed by the model being evaluated under static stress and the strength-to-weight ratio was calculated using static analysis and topological analysis. The findings were then thoroughly examined to determine their validity and reliability.

Because of the alterations made to the push rim, which allows force transfer from the athlete to the power meter, the power meter can detect power at the hub of the wheel assembly, as shown in this report.