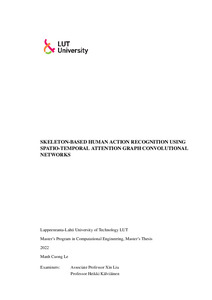 In human action recognition, skeleton-based data is an effective way to represent the performing actions. Many recent studies focus on this line of research and significant results have been achieved. In this study, an attention graph convolutional network model for skeleton-based action recognition is proposed to improve the previous methods. The model consists of two components: spatial and temporal modeling. First, spatial features are captured by combining self-attentions with prior information on human kinetics. Then, time-dependent features across frames can be captured using temporal self-attentions and multi-scale convolutions. By utilizing self-attention mechanisms, a small neural network architecture that can effectively model the skeleton data can be created. The captured information is then globally fused to generate the final representation for the classification of human actions. The proposed method achieved competitive classification results compared to state-of-the-art methods such as MS-G3D and CTR-GCN, on the NTU-RGB+D60 dataset and the NTU-RGB+D120 dataset.