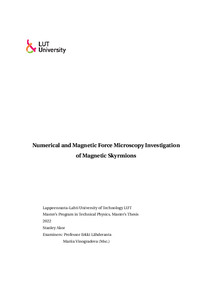 Magnetic skyrmions are quantum particles that have the potential to replace traditional information storage mediums such as magnetic tapes. They have unique properties such as increased storage capacity, improved data protection, lower spin-polarised currents required to drive them, and so on. In this study, the magnetization structure of magnetic skyrmions were investigated, and two types of skyrmions were discovered based on different magnetization rotation inside the vortex. The stray field signatures of skyrmions, as well as their dynamics in 2D materials, were investigated for the Néel and Bloch types of skyrmions. The obtained stray field in the x, y, and z directions revealed that both the in-plane and out-of-plane components of the field range between -65 mT and +65 mT; additionally, a 2D map of this field was obtained to better understand its spatial distribution.

Furthermore, an atomic force microscope (AFM) was made to operate in the magnetic force microscopy (MFM) regime with an external magnet. A single layer skyrmion sample was investigated using the experimental setup in order to visualize the skyrmion phase. The resulting MFM images were compared with those obtained from magneto-optical kerr effect (MOKE) microscopy.