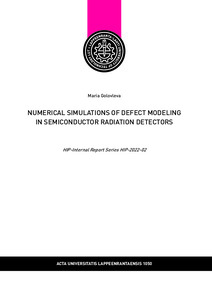 Semiconductor radiation detectors are the core of high energy physics experiments. Silicon (Si)-based segmented particle sensors detect and track all the charged particles that are produced during the collisions in different experiments at LHC, for example. Silicon tracking detectors have been designed and developed to cope with the already challenging radiation environments of the present LHC. However, after the foreseen upgrade, the inner tracking systems will have to be operable at extreme radiation levels. Sensors suffer from radiation induced damage that deteriorate the device performance, such as reducing charge collection efficiency.

Another use of such detectors is medical imaging. However, in addition to the radiationinduced defects that deteriorate device efficiency during their working lifetime, there are process-related issues at the manufacturing stage that can drastically affect device efficiency. For instance, in case of Cadmium Telluride (CdTe) sensors, extended crystallographic defects can lead to locally reduced charge collection.

The costs and time of the development phase of a semiconductor device can be largely reduced through the application of Technology Computer-Aided Design (TCAD) software packages. TCAD is an important tool for understanding the link between semiconductor physics and the electrical behavior of devices. It is used to design, analyze and optimize semiconductor technologies and devices based on accurate models of fundamental processes. This thesis features the simulation studies of the defect impact on the device performance. In particular, CdT e diodes, chemical vapor deposited (CVD) diamond detectors and Si detectors with alumnium oxide (Al2O3) thin film have been simulated and studied. Comparisons between the simulated results have been done to the corresponding laboratory measurements performed under equivalent conditions. Surface damage simulation studies of Al2O3 thin films have been performed. The study of the effects of defects in CdTe pad detectors with the red laser transient current technique (TCT) and the effect of the surface passivation on the outcome signal was performed.