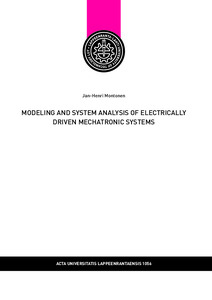 Kaikki oikeudet pidätetään.
In reference to IEEE copyrighted material which is used with permission in this thesis, the IEEE does not endorse any of Lappeenranta-Lahti University of Technology LUT's products or services. Internal or personal use of this material is permitted. If interested in reprinting/republishing IEEE copyrighted material for advertising or promotional purposes or for creating new collective works for resale or redistribution, please go to http://www.ieee.org/publications_ standards/publications/rights/rights_link.html to learn how to obtain a License from RightsLink.
Näytä kaikki kuvailutiedot
Julkaisun pysyvä osoite on
https://urn.fi/URN:ISBN:978-952-335-893-5

A mechatronic system consists of mechanics, power electronics, and control electronics. Thus, designing a mechatronic system requires multidisciplinary knowledge. As the capabilities of microprocessors have increased and prices have declined, various mechanical systems are now controlled by computer-based control systems.

To be able to design a control for such applications, a model of the system is required that describes the phenomena that are being controlled. This doctoral dissertation investigates different levels of complexity for a model of a system consisting of an inverter, an electric motor, and mechanics. In addition, the study addresses the questions of how the models to be applied should be selected and how the selections affect other submodels in the system. The use of multibody-dynamics-based virtual simulation and hardware-in-theloop simulation as tools for system simulation is also studied. Further, literature references and the publications included in the dissertation are provided as examples. The included publications each report a modeling or control challenge, and different methods are employed to solve these challenges.

It was shown that the selection of the model or the modeling method (such as virtual simulation) was successful in each of the presented cases. The model applied in the cases could describe accurately enough the phenomena that were being studied. Thus, after achieving an accurate enough model of the system, the control problem could be approached. The study also demonstrated that building a model requires an analysis of the system and understanding of the phenomena that are present in the system.