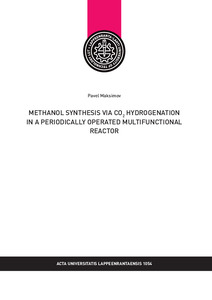 Recognising the unsustainable nature of the current production practices, the global economy is now steering away from fossil energy sources. Although wind and solar energy have seen tremendous improvements over the past two decades, it is not possible to harness their true potential without accounting for the generation intermittency through efficient energy storage solutions. In this context, as a liquid fuel and a versatile platform chemical, methanol can become the energy feedstock of the future. Methanol synthesis via CO2 hydrogenation could be an effective synergetic solution that would simultaneously enable efficient utilisation of renewable electricity, decouple the chemical industry from the fossil-based feedstocks, and help in reducing net CO2 emissions.

The major challenge to the economically viable deployment of the process is the high demand for large amounts of H2 required for the reduction of the deeply oxidised CO2 molecule. From the perspective of technical feasibility, the process also suffers from significant thermodynamic limitations that result in low per-pass conversion, which requires large recirculation rates and increases utility consumption. As the cost of green H2 is estimated to decrease substantially in the future, overcoming the equilibrium-related limitations of CO2 hydrogenation to methanol will bring the process closer to commercialisation. Therefore, this work aims to intensify the process of CO2-based methanol production by shifting the thermodynamic equilibrium via selective in-situ removal of water that is formed as a by-product of methanol synthesis reactions.

The process was implemented in a periodically operated multifunctional reactor filled with methanol synthesis catalyst and water selective adsorbent. In order to accurately capture the dynamic nature of the process, time-resolved monitoring of the product stream composition was achieved with Raman spectroscopy. In addition to the experimental study, a rigorous mathematical model of the process was developed. Key process parameters, such as pressure, temperature, gas flow velocity and catalyst-to-adsorbent ratio were analysed with the view of investigating their effect on process performance. The experimentally validated reactor model was extended to account for downstream product separation, recirculation of the unreacted gases and periodic adsorbent regeneration via pressure swing adsorption. Adiabatic and quasi-isothermal reactor configurations were considered, and a series of parametric and optimisation studies were conducted with the intent of maximising process efficiency considering the specific production rate and the purity of the obtained methanol product.

The designed multifunctional reactor system was found to yield a methanol product of high purity, thereby significantly simplifying further processing. However, the acquired results indicate a clear inverse relationship between specific methanol production rate and methanol product purity, with the gas hourly space velocity being the main determining parameter in this regard. The process under study exhibits lower specific production rate compared to conventional steady-state CO2-based methanol synthesis. However, the perpass CO2 conversion and methanol yield are much higher in the periodically operated multifunctional reactor. Therefore, the investigated process demonstrates the potential to improve H2 utilisation efficiency and effectively overcome the thermodynamic limitations, which hinder CO2-based methanol production. The complex and multifaceted nature of the process requires optimisation on both reactor and process levels. This way, the results and observations reported in this work provide a sound basis for design and implementation of methanol synthesis through sorption enhanced CO2 hydrogenation.