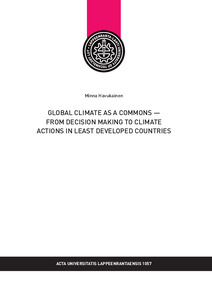 The international battle against climate change requires action from all parties of the United Nations Framework Convention on Climate Change including the rapidly developing low-income countries. Most of the least developed countries (LDCs) have prepared nationally determined contributions (NDCs) to implement the Paris Agreement (PA). Most have strategies to tackle a fair share of the burden, regardless of the different economic challenges they face. The developed countries have made pledges to financially assist the LDCs, and several financial instruments, such as the Clean Development Mechanism (CDM) and funds have been used. Understanding the variation in commitment among LDCs would improve climate agreements and enhance global implementation of climate action. This study aims to determine the degree to which 36 LDCs implemented the PA in their NDCs, as well as the factors that determined this degree. A closer investigation of the implementation of climate strategies was conducted using Nepal as a case study. Aid-dependent Nepal is vulnerable to climate change and committed to its mitigation while pursuing democracy and development.

The institutional analysis and development (IAD) framework and the institutional grammar tool (IGT) developed by Elinor Ostrom and her colleagues was applied to implement systematic assessments of institutions and the reform of national climate policy. To identify the determinants of the degree of implementation, national contexts, decision making, and patterns of interaction were investigated for six case countries. Current national institutions have not enabled effective climate change mitigation. Despite relevant political decisions being made, progress toward climate change mitigation is slow. In general, climate change has not been widely tackled across all the relevant sectors, such as waste management, traffic, and agriculture, nor across governance levels, and there is little coherence between development and climate policies. Instead, natural resource management is often prioritized for climate actions. Countries that focus more on structural changes and institutional strengthening, such as education and political and legislative instruments, are likely to implement the PA to a high degree. Therefore, encouraging countries to implement changes in the national institutional and economic arrangements required for effective climate change mitigation is crucial. A fair, inclusive procedure, a reasonable legitimate burden; variety of instruments; and the required criteria with synergy between mitigation and development provide the most effective mitigation. Building local science institutions and funding addressed effectively, even to local actors, are key options for improving the implementation of the national climate strategies of LDCs. The variation in commitment among LDCs is driven by their perspective on fair share of climate actions and climate finance.