Hyppää sisältöön
Näytä aineisto
JavaScript is disabled for your browser. Some features of this site may not work without it.
Järjestelmä sulkeutuu huoltotoimenpiteitä varten. Tallenna työsi ja kirjaudu ulos, ole hyvä.

Experimental thermal hydraulic studies on the enhancement of safety of LWRs 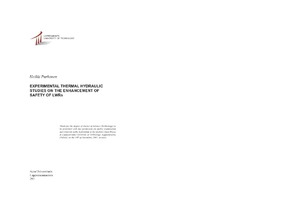 The safe use of nuclear power plants (NPPs) requires a deep understanding of the functioning of physical processes and systems involved. Studies on thermal hydraulics have been carried out in various separate effects and integral test facilities at Lappeenranta University of Technology (LUT) either to ensure the functioning of safety systems of light water reactors (LWR) or to produce validation data for the computer codes used in safety analyses of NPPs.
Several examples of safety studies on thermal hydraulics of the nuclear power plants are discussed. Studies are related to the physical phenomena existing in different processes in NPPs, such as rewetting of the fuel rods, emergency core cooling (ECC), natural circulation, small break loss-of-coolant accidents (SBLOCA), non-condensable gas release and transport, and passive safety systems. Studies on both VVER and advanced light water reactor (ALWR) systems are included.
The set of cases include separate effects tests for understanding and modeling a single physical phenomenon, separate effects tests to study the behavior of a NPP component or a single system, and integral tests to study the behavior of the whole system.
In the studies following steps can be found, not necessarily in the same study.
Experimental studies as such have provided solutions to existing design problems.
Experimental data have been created to validate a single model in a computer code.
Validated models are used in various transient analyses of scaled facilities or NPPs. Integral test data are used to validate the computer codes as whole, to see how the implemented models work together in a code. In the final stage test results from the facilities are transferred to the NPP scale using computer codes.
Some of the experiments have confirmed the expected behavior of the system or procedure to be studied; in some experiments there have been certain unexpected phenomena that have caused changes to the original design to avoid the recognized problems. This is the main motivation for experimental studies on thermal hydraulics of the NPP safety systems. Naturally the behavior of the new system designs have to be checked with experiments, but also the existing designs, if they are applied in the conditions that differ from what they were originally designed for. New procedures for existing reactors and new safety related systems have been developed for new nuclear power plant concepts. New experiments have been continuously needed.