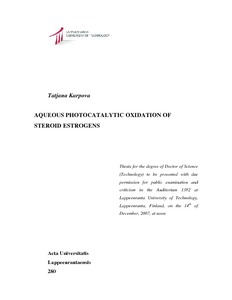 Concerns have increased regarding the detection of endocrine-disrupting compounds in the effluents of sewage treatment plants (STPs). These compounds are able to disrupt normal function of the endocrine system of living organisms even at trace concentrations.
Natural and synthetic steroid estrogens (SEs) are believed to be responsible for the majority of the endocrine-disrupting effects. Municipal sewage, the main source of SEs in the environment, is a complex mixture of a wide range of pollutants at concentrations much higher than those of SEs. Low concentrations of SEs in the presence of copollutants thus make their removal problematic.
The main objectives of the present work were to study the potential of photocatalytic oxidation (PCO) to effectively treat SE-containing aqueous solutions and to identify the optimum conditions for such treatment. The results showed that SEs can be effectively degraded photocatalytically. Due to the adsorption properties of SEs on the TiO2
photocatalyst surface alkaline medium was found to be beneficial for SE oxidation despite the presence of co-pollutants in concentrations characteristic for the sanitary fraction of municipal sewage.
The potential of PCO to selectively oxidise SEs was examined in the presence of copollutants of the sanitary fraction of sewage - urea, saccharose and human urine. The impact of ethanol, often used as a solvent in the preparation of SE stock solutions, was also studied and the results indicated the need to use organic solvent-free solutions for the study of SE behaviour. Photocatalytic oxidation of SEs appeared to be indifferent towards the presence of urea in concentrations commonly found in domestic sewage. The effect of other co-pollutants under consideration was far weaker than could be expected from their concentrations, which are from one hundred to a few thousands times higher than those of the SEs. Although higher concentrations can dramatically slow down the PCO of SEs, realistic concentrations of co-pollutants characteristic for the sanitary fraction of domestic sewage allowed selective removal of SEs. This indicates the potential of PCO to be a selective oxidation method for SE removal from the separate sanitary fraction of municipal sewage.