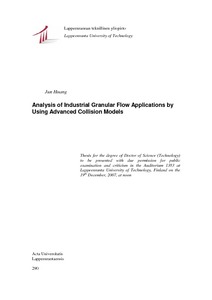 Granular flow phenomena are frequently encountered in the design of process and industrial plants in the traditional fields of the chemical, nuclear and oil industries as well as in other activities such as food and materials handling. Multi-phase flow is one important branch of the granular flow.
Granular materials have unusual kinds of behavior compared to normal materials, either solids or fluids. Although some of the characteristics are still not well-known yet, one thing is confirmed: the particle-particle interaction plays a key role in the dynamics of granular materials, especially for dense granular materials. At the beginning of this thesis, detailed illustration of developing two models for describing the interaction based on the results of finite-element simulation, dimension analysis and numerical simulation is presented. The first model is used to describing the normal collision of viscoelastic particles. Based on some existent models, more parameters are added to this model, which make the model predict the experimental results more accurately. The second model is used for oblique collision, which include the effects from tangential velocity, angular velocity and surface friction based on Coulomb's law. The theoretical predictions of this model are in agreement with those by finite-element simulation.
I n the latter chapters of this thesis, the models are used to predict industrial granular flow and the agreement between the simulations and experiments also shows the validation of the new model. The first case presents the simulation of granular
flow passing over a circular obstacle. The simulations successfully predict the existence of a parabolic steady layer and show how the characteristics of the particles, such as coefficients of restitution and surface friction affect the separation results. The second case is a spinning container filled with granular material. Employing the previous models, the simulation could also reproduce experimentally observed phenomena, such as a depression in the center of a high frequency rotation. The third application is about gas-solid mixed flow in a vertically vibrated device. Gas phase motion is added to coherence with the particle motion. The governing equations of the gas phase are solved by using the Large eddy simulation (LES) and particle motion is predicted by using the Lagrangian method. The simulation predicted some pattern formation reported by experiment.