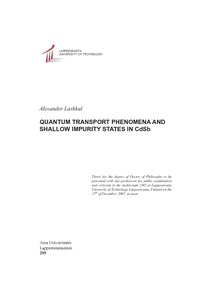 This work is dedicated to investigation of the energy spectrum of one of the most anisotropic narrow-gap semiconductors, CdSb. At the beginning of the present studies even the model of its energy band structure was not clear. Measurements of galvanomagnetic effects in wide temperature range (1.6 - 300 K) and in magnetic fields up to 30 T were chosen for clarifying of the energy spectrum in the intentionally undoped CdSb single crystals and doped with shallow impurities (In, Ag).
Detection of the Shubnikov - de Haas oscillations allowed estimating the fundamental energy spectrum parameters. The shapes of the Fermi surfaces of electrons (sphere) and holes (ellipsoid), the number of the equivalent extremums for valence band (2) and their positions in the Brillouin zone were determined for the first time in this work. Also anisotropy coefficients, components of the tensor of effective masses of carriers, effective masses of density of states, nonparabolicity of the conduction and valence bands, g-factor and its anisotropy for n- and p-CdSb were estimated for the first time during these studies. All the results obtained are compared with the cyclotron resonance data and the corresponding theoretical calculations for p-CdSb. This is basic information for the analyses of the complex transport properties of CdSb and for working out the energy spectrum model of the shallow energy levels of defects and impurities in this semiconductor.
It was found out existence of different mechanisms of hopping conductivity in the presence of metal - insulator transition induced by magnetic field in n- and p-CdSb.
Quite unusual feature opened in CdSb is that different types of hopping conductivity may take place in the same crystal depending on temperature, magnetic field or even orientation of crystal in magnetic field.
Transport properties of undoped p-CdSb samples show that the anisotropy of the resistivity in weak and strong magnetic fields is determined completely by the anisotropy of the effective mass of the holes. Temperature and magnetic field dependence of the Hall coefficient and magnetoresistance is attributed to presence of two groups of holes with different concentrations and mobilities. The analysis demonstrates that below Tcr ~ 20 K and down to ~ 6 - 7 K the low-mobile carriers are itinerant holes with energy E2 ≈
6 meV. The high-mobile carriers, at all temperatures T < Tcr, are holes activated thermally from a deeper acceptor band to itinerant states of a shallower acceptor band with energy E1 ≈ 3 meV. Analysis of temperature dependences of mobilities confirms the existence of the heavy-hole band or a non-equivalent maximum and two equivalent maxima of the light-hole valence band.
Galvanomagnetic effects in n-CdSb reveal the existence of two groups of carriers.
These are the electrons of a single minimum in isotropic conduction band and the itinerant electrons of the narrow impurity band, having at low temperatures the energies above the bottom of the conduction band. It is found that above this impurity band exists second impurity band of only localized states and the energy of both impurity bands depend on temperature so that they sink into the band gap when temperature is increased.
The bands are splitted by the spin, and in strong magnetic fields the energy difference between them decreases and redistribution of the electrons between the two impurity bands takes place.
Mobility of the conduction band carriers demonstrates that scattering in n-CdSb at low temperatures is strongly anisotropic. This is because of domination from scattering on the neutral impurity centers and increasing of the contribution to mobility from scattering by acoustic phonons when temperature increases. Metallic conductivity in zero or weak magnetic field is changed to activated conductivity with increasing of magnetic field. This exhibits a metal-insulator transition (MIT) induced by the magnetic field due to shift of the Fermi level from the interval of extended states to that of the localized states of the electron spectrum near the edge of the conduction band. The Mott variablerange hopping conductivity is observed in the low- and high-field intervals on the insulating side of the MIT. The results yield information about the density of states, the localization radius of the resonant impurity band with completely localized states and about the donor band. In high magnetic fields this band is separated from the conduction band and lies below the resonant impurity bands.