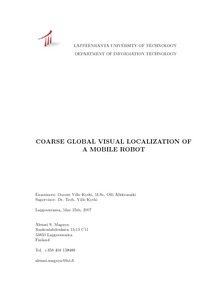 Localization, which is the ability of a mobile robot to estimate its position within its environment, is a key capability for autonomous operation of any mobile robot. This thesis presents a system for indoor coarse and global localization of a mobile robot based on visual information.
The system is based on image matching and uses SIFT features as natural landmarks. Features extracted from training images arestored in a database for use in localization later. During localization an image of the scene is captured using the on-board camera of the robot, features are extracted from the image and the best match is searched from the database. Feature matching is done using the k-d tree algorithm.
Experimental results showed that localization accuracy increases with the number of training features used in the training database, while, on the other hand, increasing number of features tended to have a negative impact on the computational time. For some parts of the environment the error rate was relatively high due to a strong correlation of features taken from those places across the environment.