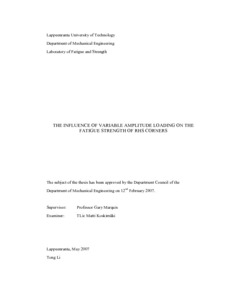 Rectangular hollow section (RHS) members are components widely used in engineering applications because of their good-looking, good properties in engineering areas and inexpensive cost comparing to members with other sections. The increasing use of RHS in load bearing structures makes it necessary to analyze the fatigue behavior of the RHS members. In this thesis, concentration will be given to the fatigue behavior of the RHS members under variable amplitude pure torsional loading.

For the RHS members, failure will normally occur in the corner region if the welded regions are under full penetration. This is because of the complicated stress components' distributions at the RHScorners, where all of three fracture mechanics modes will happen. Mode I is mainly caused by the residual stresses that caused by the manufacturing process. Modes II and III are caused by the applied torsional loading. Stress based Findleymodel is also used to analyze the stress components.