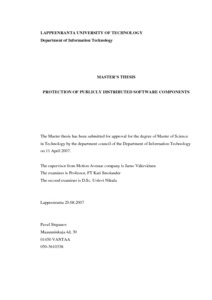 The nature of client-server architecture implies that some modules are delivered to customers. These publicly distributed commercial software components are under risk, because users (and simultaneously potential malefactors) have physical access to some components of the distributed system. The problem becomes even worse if interpreted programming languages are used for creation of client side modules. The language Java, which was designed to be compiled into platform independent byte-code is not an exception and runs the additional risk. Along with advantages like verifying the code before execution (to ensure that program does not produce some illegal operations)Java has some disadvantages. On a stage of byte-code a java program still contains comments, line numbers and some other instructions, which can be used for reverse-engineering.
This Master's thesis focuses on protection of Java code based client-server applications. I present a mixture of methods to protect software from tortious acts. Then I shall realize all the theoretical assumptions in a practice and examine their efficiency in examples of Java code. One of the criteria's to evaluate the system is that my product is used for specialized area of interactive television.