Distribution systems of the food sector in Russia: the perspective of Finnish food industry 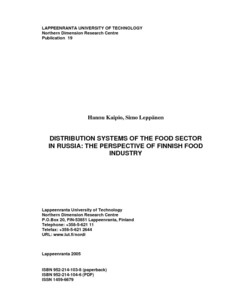 Finnish food producers' trade with Russia has experienced profound changes since the collapse of the Soviet Union. Simultaneously, the distribution systems of foodstuffs have changed remarkably. This study sheds some light into these changes and analyses the current situation in distribution systems of foodstuffs in Russia. In addition, the study discusses the possibilities of Finnish food producers to get more of their products to the shelves of Russian food retail stores. Before the 1998 financial crisis, the import of foreign foodstuffs was booming in Russia due to the overvalued rouble. As a result of the financial crisis, food import collapsed. The export of Finnish foodstuffs to Russia has been slowly recovering during the past few years, but in the most important product categories the pre-crisis levels have so far not been reached and maybe will not be reached. In certain product categories the growth has been only marginal. It seems that starting localproduction will become increasingly important in the future. This is further encouraged by the fact that Russian consumers favour domestic food products. Russian consumers are very price conscious and demand quality in food products. The perceived price-quality ratio is an important criterion in the purchase decision.The majority of foodstuff retail is still conducted via unorganised forms of trade (e.g. kiosks and marketplaces) but modern retail chains are developing at a fast pace in Russia. They are also expected to dominate the retail trade in foodstuffs over the unorganised forms of trade in the future. This will change the distribution systems as well. The retail chains are trying to shorten the distribution chain, similarly to what has been seen in the Western countries. This together with the strengthening of retail chains is likely to shrink the role of wholesalers, as the chains increasingly want to work directly with the producers. Many large retail chains are acquiring or have already acquired a distribution centre or centres in order to boost efficiency and control the flow of products. The strengthening of the retail chains also gives them power in negotiations, which the producers and distributors have to adjust to. For example store entry fees and retail chains' own private label products pose challenges to the food producers. In the food production sector the competition is fierce, as large Russianand foreign producers want to ensure their piece of the market. The largest producers utilise their size: they invest in big marketing campaigns and are willing to pay high entry fees to retail chains in order to secure a place on the store shelves and to build a strong brand in Russia. This complicates the situation from the viewpoint of small producers. Currently, the most popular type of distribution system among the interviewed Finnish food producers is based on a network of local distributors. There is, however, a strong consensus on the importanceof starting local production in order to be a serious actor in Russia in the future. Factors that hinder the starting of local production include the lack of local infrastructure and qualified staff, and the low risk tolerance of Finnish firms. Major barriers for entry in Russia are the actions of authorities, fierce competition, fragmented market and Finnish producers' heavy production costs. The suggested strategies for increasing the market share include focusing geographically or segment-wise, introducing new products, starting local production, andcooperation between Finnish producers. Smallness was one reason why Finnish producers had to cut down their operations in Russia due to the 1998 crisis. Smaller producers had fewer resources to tolerate losses during the period of crisis. Smallness is reflected also on trade negotiations with retail chains and distributors. It makes it harder to cope with the store entry fees and to differentiatefrom the mass of products propped up by expensive advertising. Finally, it makes it harder for Finnish producers to start or expand local production, as it is more difficult for a small producer to get financing and to tolerate the increased risks. Compensating for the smallness might become the crucial factor determining the future success of Finnish food producers in the Russian market.