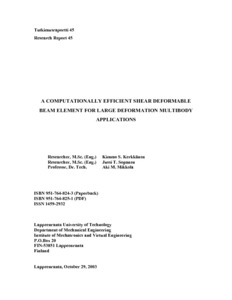 In this paper, a new two-dimensional shear deformable beam element based on the absolute nodal coordinate formulation is proposed. The nonlinear elastic forces of the beam element are obtained using a continuum mechanics approach without employing a local element coordinate system. In this study, linear polynomials are used to interpolate both the transverse and longitudinal components of the displacement. This is different from other absolute nodal-coordinate-based beam elements where cubic polynomials are used in the longitudinal direction. The accompanying defects of the phenomenon known as shear locking are avoided through the adoption of selective integration within the numerical integration method. The proposed element is verified using several numerical examples, and the results are compared to analytical solutions and the results for an existing shear deformable beam element. It is shown that by using the proposed element, accurate linear and nonlinear static deformations, as well as realistic dynamic behavior, can be achieved with a smaller computational effort than by using existing shear deformable two-dimensional beam elements.