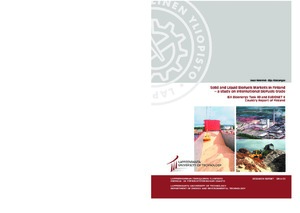 This study considered the current situation of solid and liquid biofuels markets and international biofuels trade in Finland and identified the challenges ofthe emerging international biofuels markets for Finland. The fact that industryconsumes more than half of the total primary energy, widely applied combined heat and power production (CHP) and a high share of biofuels in the total energy consumption are specific to the Finnish energy system. One third of the electricity is generated in CHP plants. As much as 27% of the total energy consumption ismet by using wood and peat, which makes Finland the leading country in the use of biofuels. Finland has made a commitment to maintain greenhouse gas emissions at the 1990 level at the highest during the period 2008-2012. The Finnish energypolicy aims to achieve the target, and a variety of measures are taken to promote the use of renewable energy sources and especially wood fuels.

In this study, the wooden raw material streams of the forest industry were included the international biofuels trade in addition to biomass streams that are traded for energy production. In 2004, as much as 45% of the raw wood importedinto Finland ended up in energy production. The total international trading of biofuels was evaluated at 72 PJ, of which the majority, 58 PJ, was raw wood. About 22% of wood based energy in Finland originated from imported raw wood. Tall oil and wood pellets composed the largest export streams of biofuels. The annual turnover of international biofuels trade was estimated at about ¤ 90 million fordirect trade and at about ¤ 190 million for indirect trade. The forest industryas the biggest user of wood, and the producer and user of wood fuels has a central position in biomass and biofuels markets in Finland. Lately, the international aspects of Finnish biofuels markets have been emphasised as the import of rawwood and the export of wood pellets have increased. Expanding the use of biofuels in the road transportation sector would increase the international streams ofbiofuels in Finland. In coming years, the international trading of biomass for energy purposes can be expected to continue growing.