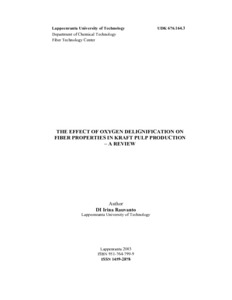 Fiber damages comprise fiber deformations, characterized as fiber curl, kink, dislocations and strength losses as well as some yet unidentified factors. This recently discovered phenomenon is especially evident in mill scale kraftpulps. Laboratory produced pulps tend to have less damages and superior strength properties compared to those produced in pulp mills. Generally fiber damages pose a problem in the production of reinforcement pulp because they tend to decrease the ability of fibers to transmit load. Previous studies on fiber damage have shown that most of the fiber damages occur during brown stock processing starting from cooking and discharging. This literature review gives an overall picture on fiber damages occurring during softwood kraft pulp production with an emphasis on the oxygen delignification stage. In addition the oxygen delignification stage itself is described in more detailed extent in order to understand the mechanisms behind the delignification and fiber damaging effect. The literature available on this subject is unfortunately quite contradictory and implicates a lotof different terms. Only a few studies have been published which help to understand the nature of fiber damages. For that reason the knowledge presented in this work is not only based on previous studies but also on research scientist and mill staff interviews.