Dynamic Simulations of Rotors during Drop on Retainer Bearings 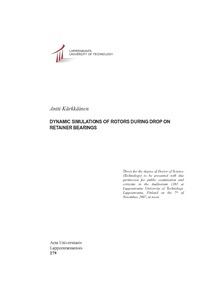 The research looks at the theoretical background of the finite element method with component mode synthesis that can be used in the dynamic analysis of flexible rotors. The retainer bearings are described by using two ball bearing models, which include damping and stiffness properties, oil film, inertia of rolling elements and friction between races and rolling elements. Thefirst bearing model assumes that the cage of the bearing is ideal and that the cage holds the balls in their predefined positions precisely. The second bearing model is an extension of the first model and describes the behavior of the cageless bearing. In the bearing model, each ball is described by using two degrees of freedom. The models introduced in this study are verified with a corresponding actual structure.