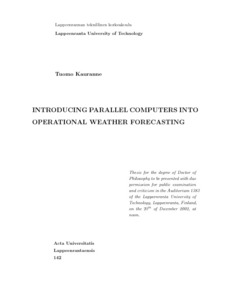 Numerical weather prediction and climate simulation have been among the computationally most demanding applications of high performance computing eversince they were started in the 1950's. Since the 1980's, the most powerful computers have featured an ever larger number of processors. By the early 2000's, this number is often several thousand. An operational weather model must use all these processors in a highly coordinated fashion. The critical resource in running such models is not computation, but the amount of necessary communication between the processors. The communication capacity of parallel computers often fallsfar short of their computational power. The articles in this thesis cover fourteen years of research into how to harness thousands of processors on a single weather forecast or climate simulation, so that the application can benefit as much as possible from the power of parallel high performance computers. The resultsattained in these articles have already been widely applied, so that currently most of the organizations that carry out global weather forecasting or climate simulation anywhere in the world use methods introduced in them. Some further studies extend parallelization opportunities into other parts of the weather forecasting environment, in particular to data assimilation of satellite observations.