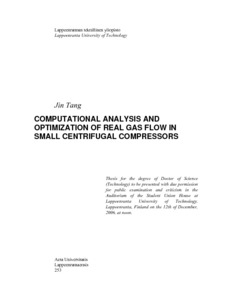 Small centrifugal compressors are more and more widely used in many industrialsystems because of their higher efficiency and better off-design performance comparing to piston and scroll compressors as while as higher work coefficient perstage than in axial compressors.
Higher efficiency is always the aim of the designer of compressors. In the present work, the influence of four partsof a small centrifugal compressor that compresses heavy molecular weight real gas has been investigated in order to achieve higher efficiency. Two parts concern the impeller: tip clearance and the circumferential position of the splitter blade. The other two parts concern the diffuser: the pinch shape and vane shape.
Computational fluid dynamics is applied in this study. The Reynolds averaged Navier-Stokes flow solver Finflo is used. The quasi-steady approach is utilized. Chien's k-e turbulence model is used to model the turbulence. A new practical real gas model is presented in this study. The real gas model is easily generated, accuracy controllable and fairly fast. The numerical results and measurements show good agreement.
The influence of tip clearance on the performance of a small compressor is obvious. The pressure ratio and efficiency are decreased as the size of tip clearance is increased, while the total enthalpy rise keeps almost constant. The decrement of the pressure ratio and efficiency is larger at higher mass flow rates and smaller at lower mass flow rates. The flow angles at the inlet and outlet of the impeller are increased as the size of tip clearance is increased. The results of the detailed flow field show that leakingflow is the main reason for the performance drop. The secondary flow region becomes larger as the size of tip clearance is increased and the area of the main flow is compressed. The flow uniformity is then decreased.
A detailed study shows that the leaking flow rate is higher near the exit of the impeller than that near the inlet of the impeller. Based on this phenomenon, a new partiallyshrouded impeller is used. The impeller is shrouded near the exit of the impeller. The results show that the flow field near the exit of the impeller is greatly changed by the partially shrouded impeller, and better performance is achievedthan with the unshrouded impeller.
The loading distribution on the impeller blade and the flow fields in the impeller is changed by moving the splitter of the impeller in circumferential direction. Moving the splitter slightly to the suction side of the long blade can improve the performance of the compressor. The total enthalpy rise is reduced if only the leading edge of the splitter ismoved to the suction side of the long blade. The performance of the compressor is decreased if the blade is bended from the radius direction at the leading edge of the splitter.
The total pressure rise and the enthalpy rise of thecompressor are increased if pinch is used at the diffuser inlet. Among the fivedifferent pinch shape configurations, at design and lower mass flow rates the efficiency of a straight line pinch is the highest, while at higher mass flow rate, the efficiency of a concave pinch is the highest. The sharp corner of the pinch is the main reason for the decrease of efficiency and should be avoided. The variation of the flow angles entering the diffuser in spanwise direction is decreased if pinch is applied.
A three-dimensional low solidity twisted vaned diffuser is designed to match the flow angles entering the diffuser. The numerical results show that the pressure recovery in the twisted diffuser is higher than in a conventional low solidity vaned diffuser, which also leads to higher efficiency of the twisted diffuser. Investigation of the detailed flow fields shows that the separation at lower mass flow rate in the twisted diffuser is later than in the conventional low solidity vaned diffuser, which leads to a possible wider flow range of the twisted diffuser.