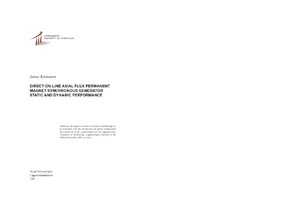 In distributed energy production, permanent magnet synchronous generators (PMSG) are often connected to the grid via frequency converters, such as voltage source line converters. The price of the converter may constitute a large part of the costs of a generating set. Some of the permanent magnet synchronous generators with converters and traditional separately excited synchronous generators couldbe replaced by direct-on-line (DOL) non-controlled PMSGs. Small directly networkconnected generators are likely to have large markets in the area of distributed electric energy generation. Typical prime movers could be windmills, watermills and internal combustion engines. DOL PMSGs could also be applied in island networks, such as ships and oil platforms. Also various back-up power generating systems could be carried out with DOL PMSGs. The benefits would be a lower priceof the generating set and the robustness and easy use of the system.
The performance of DOL PMSGs is analyzed. The electricity distribution companies have regulations that constrain the design of the generators being connected to the grid. The general guidelines and recommendations are applied in the analysis. By analyzing the results produced by the simulation model for the permanent magnet machine, the guidelines for efficient damper winding parameters for DOL PMSGs are presented. The simulation model is used to simulate grid connections and load transients. The damper winding parameters are calculated by the finite element method (FEM) and determined from experimental measurements. Three-dimensional finite element analysis (3D FEA) is carried out. The results from the simulation model and 3D FEA are compared with practical measurements from two prototype axial flux permanent magnet generators provided with damper windings.
The dimensioning of the damper winding parameters is case specific. The damper winding should be dimensioned based on the moment of inertia of the generating set. It is shown that the damper winding has optimal values to reach synchronous operation in the shortest period of time after transient operation. With optimal dimensioning, interferenceon the grid is minimized.