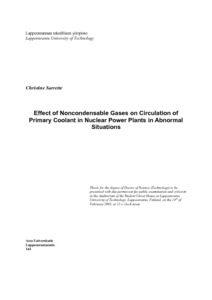 The present study focuses on two effects of the presence of a noncondensable gas on the thermal-hydraulic behavior of thecoolant of the primary circuit of a nuclear reactor in the VVER-440 geometry inabnormal situations. First, steam condensation with the presence of air was studied in the horizontal tubes of the steam generator (SG) of the PACTEL test facility. The French thermal-hydraulic CATHARE code was used to study the heat transfer between the primary and secondary side in conditions derived from preliminary experiments performed by VTT using PACTEL. In natural circulation and single-phase vapor conditions, the injection of a volume of air, equivalent to the totalvolume of the primary side of the SG at the entrance of the hot collector, did not stop the heat transfer from the primary to the secondary side. The calculated results indicate that air is located in the second half-length (from the mid-length of the tubes to the cold collector) in all the tubes of the steam generator The hot collector remained full of steam during the transient. Secondly, the potential release of the nitrogen gas dissolved in the water of the accumulators of the emergency core coolant system of the Loviisa nuclear power plant (NPP) was investigated. The author implemented a model of the dissolution and release ofnitrogen gas in the CATHARE code; the model created by the CATHARE developers. In collaboration with VTT, an analytical experiment was performed with some components of PACTEL to determine, in particular, the value of the release time constant of the nitrogen gas in the depressurization conditions representative of the small and intermediate break transients postulated for the Loviisa NPP. Such transients, with simplified operating procedures, were calculated using the modified CATHARE code for various values of the release time constant used in the dissolution and release model. For the small breaks, nitrogen gas is trapped in thecollectors of the SGs in rather large proportions. There, the levels oscillate until the actuation of the low-pressure injection pumps (LPIS) that refill the primary circuit. In the case of the intermediate breaks, most of the nitrogen gas is expelled at the break and almost no nitrogen gas is trapped in the SGs. In comparison with the cases calculated without taking into account the release of nitrogen gas, the start of the LPIS is delayed by between 1 and 1.75 h. Applicability of the obtained results to the real safety conditions must take into accountthe real operating procedures used in the nuclear power plant.