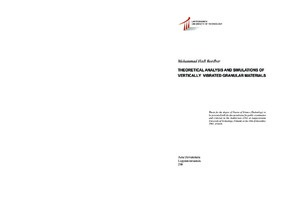 The dynamical properties ofshaken granular materials are important in many industrial applications where the shaking is used to mix, segregate and transport them. In this work asystematic, large scale simulation study has been performed to investigate the rheology of dense granular media, in the presence of gas, in a three dimensional vertical cylinder filled with glass balls. The base wall of the cylinder is subjected to sinusoidal oscillation in the vertical direction. The viscoelastic behavior of glass balls during a collision, have been studied experimentally using a modified Newton's Cradle device.
By analyzing the results of the measurements, using numerical model based on finite element method, the viscous damping coefficient was determinedfor the glass balls. To obtain detailed information about the interparticle interactions in a shaker, a simplified model for collision between particles of a granular material was proposed. In order to simulate the flow of surrounding gas, a formulation of the equations for fluid flow in a porous medium including particle forces was proposed. These equations are solved with Large Eddy Simulation (LES) technique using a subgrid-model originally proposed for compressible turbulent flows.
For a pentagonal prism-shaped container under vertical vibrations, the results show that oscillon type structures were formed. Oscillons are highly localized particle-like excitations of the granular layer. This self-sustaining state was named by analogy with its closest large-scale analogy, the soliton, which was first documented by J.S. Russell in 1834. The results which has been reportedbyBordbar and
Zamankhan(2005b)also show that slightly revised fluctuation-dissipation theorem might apply to shaken sand, which appears to be asystem far from equilibrium and could exhibit strong spatial and temporal variations in quantities such as density and local particle velocity. In this light, hydrodynamic type continuum equations were presented for describing the deformation and flow of dense gas-particle mixtures. The constitutive equation used for the stress tensor provides an effective viscosity with a liquid-like character at low shear rates and a gaseous-like behavior at high shear rates.
The numerical solutions were obtained for the aforementioned hydrodynamic equations for predicting the flow dynamics ofdense mixture of gas and particles in vertical cylindrical containers. For a heptagonal prism shaped container under vertical vibrations, the model results were found to predict bubbling behavior analogous to those observed experimentally. This bubbling behavior may be explained by the unusual gas pressure distribution found in the bed.
In addition, oscillon type structures were found to be formed using a vertically vibrated, pentagonal prism shaped container in agreement with computer simulation results. These observations suggest that the pressure distribution plays a key rolein deformation and flow of dense mixtures of gas and particles under vertical vibrations. The present models provide greater insight toward the explanation of poorly understood hydrodynamic phenomena in the field of granular flows and dense gas-particle mixtures. The models can be generalized to investigate the granular material-container wall interactions which would be an issue of high interests in the industrial applications. By following this approach ideal processing conditions and powder transport can be created in industrial systems.