On Modelling, System Identification and Control of Servo-Systems with a Flexible Load 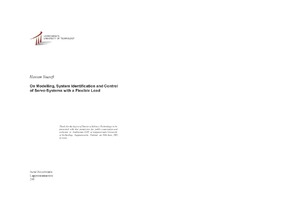 The present study was done with two different servo-systems. In the first system, a servo-hydraulic system was identified and then controlled by a fuzzy gainscheduling controller. The second servo-system, an electro-magnetic linear motor in suppressing the mechanical vibration and position tracking of a reference model are studied by using a neural network and an adaptive backstepping controller respectively. Followings are some descriptions of research methods.
Electro Hydraulic Servo Systems (EHSS) are commonly used in industry. These kinds of systems are nonlinearin nature and their dynamic equations have several unknown parameters.System identification is a prerequisite to analysis of a dynamic system. One of the most promising novel evolutionary algorithms is the Differential Evolution (DE) for solving global optimization problems. In the study, the DE algorithm is proposed for handling nonlinear constraint functionswith boundary limits of variables to find the best parameters of a servo-hydraulic system with flexible load. The DE guarantees fast speed convergence and accurate solutions regardless the initial conditions of parameters.
The control of hydraulic servo-systems has been the focus ofintense research over the past decades. These kinds of systems are nonlinear in nature and generally difficult to control. Since changing system parameters using the same gains will cause overshoot or even loss of system stability. The highly non-linear behaviour of these devices makes them ideal subjects for applying different types of sophisticated controllers. The study is concerned with a second order model reference to positioning control of a flexible load servo-hydraulic system using fuzzy gainscheduling. In the present research, to compensate the lack of dampingin a hydraulic system, an acceleration feedback was used. To compare the results, a pcontroller with feed-forward acceleration and different gains in extension and retraction is used. The design procedure for the controller and experimental results are discussed. The results suggest that using the fuzzy gain-scheduling controller decrease the error of position reference tracking.
The second part of research was done on a PermanentMagnet Linear Synchronous Motor (PMLSM). In this study, a recurrent neural network compensator for suppressing mechanical vibration in PMLSM with a flexible load is studied. The linear motor is controlled by a conventional PI velocity controller, and the vibration of the flexible mechanism is suppressed by using a hybrid recurrent neural network. The differential evolution strategy and Kalman filter method are used to avoid the local minimum problem, and estimate the states of system respectively. The proposed control method is firstly designed by using non-linear simulation model built in Matlab Simulink and then implemented in practical test rig. The proposed method works satisfactorily and suppresses the vibration successfully.
In the last part of research, a nonlinear load control method is developed and implemented for a PMLSM with a flexible load. The purpose of the controller is to track a flexible load to the desired position reference as fast as possible and without awkward oscillation. The control method is based on an adaptive backstepping algorithm whose stability is ensured by the Lyapunov stability theorem. The states of the system needed in the controller are estimated by using the Kalman filter. The proposed controller is implemented and tested in a linear motor test drive and responses are presented.