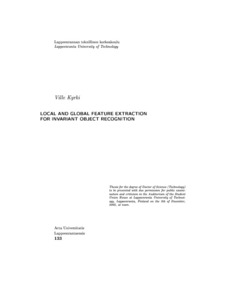 Perceiving the world visually is a basic act for humans, but for computers it is still an unsolved problem. The variability present innatural environments is an obstacle for effective computer vision. The goal of invariant object recognition is to recognise objects in a digital image despite variations in, for example, pose, lighting or occlusion. In this study, invariant object recognition is considered from the viewpoint of feature extraction. Thedifferences between local and global features are studied with emphasis on Hough transform and Gabor filtering based feature extraction. The methods are examined with respect to four capabilities: generality, invariance, stability, and efficiency. Invariant features are presented using both Hough transform and Gabor filtering. A modified Hough transform technique is also presented where the distortion tolerance is increased by incorporating local information. In addition, methods for decreasing the computational costs of the Hough transform employing parallel processing and local information are introduced.