Patents in the Information and Communications Technology Sector - Development Trends, Problem Areas and Pressures for Change 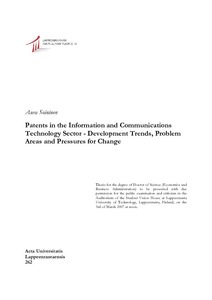 The patent system was created for the purpose of promoting innovation by granting the inventors a legally defined right to exclude others in return for public disclosure. Today, patents are being applied and granted in greater numbers than ever, particularly in new areas such as biotechnology and information andcommunications technology (ICT), in which research and development (R&D) investments are also high. At the same time, the patent system has been heavily criticized. It has been claimed that it discourages
rather than encourages the introduction of new products and processes, particularly in areas that develop
quickly, lack one-product-one-patent correlation, and in which theemergence of patent thickets is
characteristic. A further concern, which is particularly acute in the U.S., is the granting of so-called 'bad
patents', i.e. patents that do not factually fulfil the patentability criteria.
From the perspective of technology-intensive companies, patents could,irrespective of the above, be
described as the most significant intellectual property right (IPR), having the potential of being used to
protect products and processes from imitation, to limit competitors' freedom-to-operate, to provide such
freedom to the company in question, and to exchange ideas with others. In fact, patents define the
boundaries of ownership in relation to certain technologies. They may be sold or licensed on their ownor
they may be components of all sorts of technology acquisition and licensing arrangements. Moreover, with
the possibility of patenting business-method inventions in the U.S., patents are becoming increasingly
important for companies basing their businesses on services.
The value of patents is dependent on the value of the invention it claims, and how it is commercialized.
Thus, most of them are worth very little, and most inventions are not worth patenting: it may be possible
to protect them in other ways, and the costs of protection may exceed the benefits. Moreover, instead of
making all inventions proprietary and seeking to appropriate as highreturns on investments as possible
through patent enforcement, it is sometimes better to allow some of them to be disseminated freely in
order to maximize market penetration. In fact, the ideology of openness is well established in the software
sector, which has been the breeding ground for the open-source movement, for instance. Furthermore,
industries, such as ICT, that benefit from network effects do not shun the idea of setting open standards
or opening up their proprietary interfaces to allow everyone todesign products and services that are
interoperable with theirs. The problem is that even though patents do not, strictly speaking, prevent access
to protected technologies, they have the potential of doing so, and conflicts of interest are not rare.
The primary aim of this dissertation is to increase understanding of the dynamics and controversies of the
U.S. and European patent systems, with the focus on the ICT sector. The study consists of three parts.
The first part introduces the research topic and the overall results of the dissertation. The second part
comprises a publication in which academic, political, legal and business developments that concern
software and business-method patents are investigated, and contentiousareas are identified. The third part
examines the problems with patents and open standards both of which carry significant economic weight
inthe ICT sector. Here, the focus is on so-called submarine patents, i.e. patentsthat remain unnoticed
during the standardization process and then emerge after the standard has been set. The factors that
contribute to the problems are documented and the practical and juridical options for alleviating them are
assessed. In total, the dissertation provides a good overview of the challenges and pressures for change the
patent system is facing,and of how these challenges are reflected in standard setting.