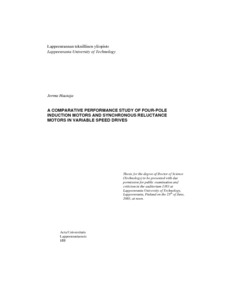 Design aspects of the Transversally Laminated Anisotropic (TLA) Synchronous Reluctance Motor (SynRM) are studied and the machine performance analysis compared to the Induction Motor (IM) is done. The SynRM rotor structure is designed and manufactured for a30 kW, four-pole, three-phase squirrel cage induction motor stator. Both the IMand SynRM were supplied by a sensorless Direct Torque Controlled (DTC) variablespeed drive. Attention is also paid to the estimation of the power range where the SynRM may compete successfully with a same size induction motor. A technicalloss reduction comparison between the IM and SynRM in variable speed drives is done. The Finite Element Method (FEM) is used to analyse the number, location and width of flux barriers used in a multiple segment rotor. It is sought for a high saliency ratio and a high torque of the motor. It is given a comparison between different FEM calculations to analyse SynRM performance. The possibility to take into account the effect of iron losses with FEM is studied. Comparison between the calculated and measured values shows that the design methods are reliable. A new application of the IEEE 112 measurement method is developed and used especially for determination of stray load losses in laboratory measurements. The study shows that, with some special measures, the efficiency of the TLA SynRM is equivalent to that of a high efficiency IM. The power factor of the SynRM at rated load is smaller than that of the IM. However, at lower partial load this difference decreases and this, probably, brings that the SynRM gets a better power factor in comparison with the IM. The big rotor inductance ratio of the SynRM allows a good estimating of the rotor position. This appears to be very advantageous for the designing of the rotor position sensor-less motor drive. In using the FEM designed multi-layer transversally laminated rotor with damper windings it is possible to design a directly network driven motor without degrading the motorefficiency or power factor compared to the performance of the IM.