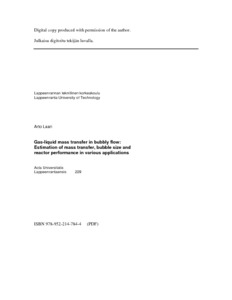 Gas-liquid mass transfer is an important issue in the design and operation of many chemical unit operations. Despite its importance, the evaluation of gas-liquid mass transfer is not straightforward due to the complex nature of the phenomena involved. In this thesis gas-liquid mass transfer was evaluated in three different gas-liquid reactors in a traditional way by measuring the volumetric mass transfer coefficient (kLa). The studied reactors were a bubble column with a T-junction two-phase nozzle for gas dispersion, an industrial scale bubble column reactor for the oxidation of tetrahydroanthrahydroquinone and a concurrent downflow structured bed.The main drawback of this approach is that the obtained correlations give only the average volumetric mass transfer coefficient, which is dependent on average conditions. Moreover, the obtained correlations are valid only for the studied geometry and for the chemical system used in the measurements. In principle, a more fundamental approach is to estimate the interfacial area available for mass transfer from bubble size distributions obtained by solution of population balance equations. This approach has been used in this thesis by developing a population balance model for a bubble column together with phenomenological models for bubble breakage and coalescence. The parameters of the bubble breakage rate and coalescence rate models were estimated by comparing the measured and calculated bubble sizes. The coalescence models always have at least one experimental parameter. This is because the bubble coalescence depends on liquid composition in a way which is difficult to evaluate using known physical properties. The coalescence properties of some model solutions were evaluated by measuring the time that a bubble rests at the free liquid-gas interface before coalescing (the so-calledpersistence time or rest time). The measured persistence times range from 10 msup to 15 s depending on the solution. The coalescence was never found to be instantaneous. The bubble oscillates up and down at the interface at least a coupleof times before coalescence takes place. The measured persistence times were compared to coalescence times obtained by parameter fitting using measured bubble size distributions in a bubble column and a bubble column population balance model. For short persistence times, the persistence and coalescence times are in good agreement. For longer persistence times, however, the persistence times are at least an order of magnitude longer than the corresponding coalescence times from parameter fitting. This discrepancy may be attributed to the uncertainties concerning the estimation of energy dissipation rates, collision rates and mechanisms and contact times of the bubbles.