Experimental and Numerical Analysis of Different Volutes in a Centrifugal Compressor 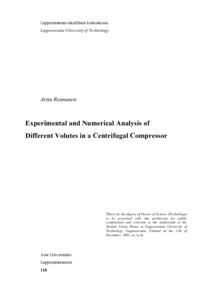 In a centrifugal compressor the flow around the diffuser is collected and led to the pipe system by a spiral-shaped volute. In this study a single-stage centrifugal compressor with three different volutes is investigated. The compressorwas first equipped with the original volute, the cross-section of which was a combination of a rectangle and semi-circle. Next a new volute with a fully circular cross-section was designed and manufactured. Finally, the circular volute wasmodified by rounding the tongue and smoothing the tongue area. The overall performance of the compressor as well as the static pressure distribution after the impeller and on the volute surface were measured. The flow entering the volute was measured using a three-hole Cobra-probe, and flow visualisations were carriedout in the exit cone of the volute. In addition, the radial force acting on theimpeller was measured using magnetic bearings. The complete compressor with thecircular volute (inlet pipe, full impeller, diffuser, volute and outlet pipe) was also modelled using computational fluid dynamics (CFD). A fully 3-D viscous flow was solved using a Navier-Stokes solver, Finflo, developed at Helsinki University of Technology. Chien's k-e model was used to take account of the turbulence. The differences observed in the performance of the different volutes were quite small. The biggest differences were at low speeds and high volume flows,i.e. when the flow entered the volute most radially. In this operating regime the efficiency of the compressor with the modified circular volute was about two percentage points higher than with the other volutes. Also, according to the Cobra-probe measurements and flow visualisations, the modified circular volute performed better than the other volutes in this operating area. The circumferential static pressure distribution in the volute showed increases at low flow, constant distribution at the design flow and decrease at high flow. The non-uniform static pressure distribution of the volute was transmitted backwards across the vaneless diffuser and observed at the impeller exit. At low volume flow a strong two-wave pattern developed into the static pressure distribution at the impeller exit due to the response of the impeller to the non-uniformity of pressure. The radial force of the impeller was the greatest at the choke limit, the smallest atthe design flow, and moderate at low flow. At low flow the force increase was quite mild, whereas the increase at high flow was rapid. Thus, the non-uniformityof pressure and the force related to it are strong especially at high flow. Theforce caused by the modified circular volute was weaker at choke and more symmetric as a function of the volume flow than the force caused by the other volutes.