The Interaction of the Calcium Sensitiser Levosimendan with Cardiac Troponin C 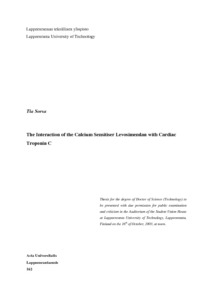 Cardiac failure is one of the leading causes of mortality in developed countries. As life expectancies of the populations of these countries grow, the number of patients suffering from cardiac insufficiency also increase. Effective treatments including the use of calcium sensitisers are being sought. They cause a positive inodilatory effect on cardio-myocytes without deleterious effects (arrhythmias) resulting from increases in intracellular calcium concentration. Levosimendan is a novel calcium sensitiser that hasbeen proved to be a welltolerated and effective treatment for patients with severe decompensated heart failure. Cardiac troponin C (cTnC) is its target protein. However, there have been controversies about the interactions between levosimendan and cTnC. Some of these controversies have been addressed in this dissertation. Furthermore, studies on the calcium sensitising mechanism based on the interactions between levosimendan and cTnC as followed by nuclear magnetic resonance(NMR) are presented and discussed. Levosimendan was found to interact with bothdomains of the calcium-saturated cTnC in the absence of cardiac troponin I (cTnI). In the presence of cTnI, the C-domain binding site was blocked and levosimendan interacted only with the regulatory domain of cTnC. This interaction may have caused the observed calcium sensitising effect by priming the N-domain for cTnI binding thereby extending the lifetime of that complex. It is suggested that this is achieved by shifting the equilibrium between open and closed conformations.