Theoretical and numerical study of thermomagnetic convection in magnetic fluids 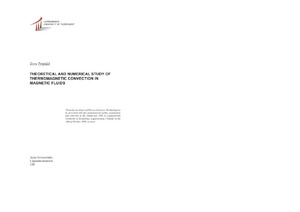 In this thesis, the magnetic field control of convection instabilities and heat and mass transfer processesin magnetic fluids have been investigated by numerical simulations and theoretical considerations. Simulation models based on finite element and finite volume methods have been developed. In addition to standard conservation equations, themagnetic field inside the simulation domain is calculated from Maxwell equations and the necessary terms to take into account for the magnetic body force and magnetic dissipation have been added to the equations governing the fluid motion.Numerical simulations of magnetic fluid convection near the threshold supportedexperimental observations qualitatively. Near the onset of convection the competitive action of thermal and concentration density gradients leads to mostly spatiotemporally chaotic convection with oscillatory and travelling wave regimes, previously observed in binary mixtures and nematic liquid crystals. In many applications of magnetic fluids, the heat and mass transfer processes including the effects of external magnetic fields are of great importance. In addition to magnetic fluids, the concepts and the simulation models used in this study may be applied also to the studies of convective instabilities in ordinary fluids as well as in other binary mixtures and complex fluids.