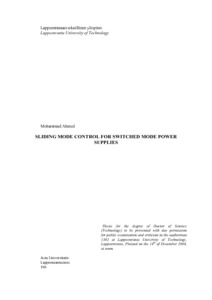 Control applications of switched mode power supplies have been widely investigated. The main objective ofresearch and development (R&D) in this field is always to find the most suitable control method to be implemented in various DC/DC converter topologies. Inother words, the goal is to select a control method capable of improving the efficiency of the converter, reducing the effect of disturbances (line and load variation), lessening the effect of EMI (electro magnetic interference), and beingless effected by component variation. The main objective of this research work is to study different control methods implemented in switched mode power supplies namely (PID control, hysteresis control, adaptive control, current programmed control, variable structure control (VSC), and sliding mode control (SMC). The advantages and drawbacks of each control method are given. Two control methods, the PID and the SMC are selected and their effects on DC/DC (Buck, Boost, and Buck-Boost) converters are examined. Matlab/SimulinkTM is used to implement PID control method in DC/DC Buck converter and SMC in DC/DC (Buck, and Buck Boost) converters. For the prototype, operational amplifiers (op-amps) are used to implement PID control in DC/DC Buck converter. For SMC op-amps are implemented in DC/DC Buck converter and dSPACETM is used to control the DC/DC Buck-Boost converter. The SMC can be applied to the DC/DC (Buck, Boost, and Buck-Boost) converters. A comparison of the effects of the PID control and the SMC on the DC/DC Buck converter response in steady state, under line variations, load variations, and different component variations is performed. Also the Conducted RF-Emissions between the PID and SMC DC/DC Buck Converter are compared. The thesis shows that, in comparison with the PID control, the SMC provides better steady-state response, better dynamic response, less EMI, inherent order reduction, robustness against system uncertainty disturbances, and an implicit stability proof. Giving a better steady-state and dynamic response, the SMC is implemented in a DC/DC resonant converter. The half-wave zero current switching (HWZCS) DC/DC Buck converter is selected as a converter topology. A general guideline to select the tank component values, needed for the designing of a HWZCS DC/DC Buck, is obtained. The implementation of the SMC to a HWZCS DC/DC Buck converter is analysed. The converter response is investigated in the steady-state region and in the dynamic region.