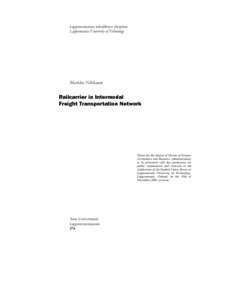 The major objective of this thesis is to describe and analyse how a railcarrier is engaged in an intermodal freight transportation network through its role and position. Because of the fact that the role as a conceptualisation has a lot of parallels with the position, both these phenomena are evaluated theoretically and empirically. VR Cargo (a strategical business unitof the Finnish railway company VR Ltd.) was chosen to be the focal firm surrounded by the actors of the focal net. Because of the fact that networks are sets of relationships rather than sets of actors, it is essential to describe the dimensions of the relationships created through the time thus having a past, presentand future. The roles are created during long common history shared by the actors especially when IM networks are considered. The presence of roles is embeddedin the tasks, and the future is anchored to the expectations. Furthermore, in this study role refers to network dynamics, and to incremental and radical changes in the network, in a similar way as position refers to stability and to the influences of bonded structures. The main purpose of the first part of the study was to examine how the two distinctive views that have a dominant position in modern logistics ¿ the network view (particularly IMP-based network approach) and the managerial view (represented by Supply Chain Management) differ, especially when intermodalism is under consideration. In this study intermodalism was defined as a form of interorganisational behaviour characterized by the physical movement of unitized goods with Intermodal Transport Units, using more than one mode as performed by the net of operators. In this particular stage the study relies mainly on theoretical evaluation broadened by some discussions with the practitioners. This is essential, because the continuous dialogue between theory and practice is highly emphasized. Some managerial implications are discussed on the basis of the theoretical examination. A tentative model for empirical analysis in subsequent research is suggested. The empirical investigation, which relies on the interviews among the members in the focal net, shows that the major role of the focal company in the network is the common carrier. This role has some behavioural and functional characteristics, such as an executive's disclosure expressing strategic will attached with stable and predictable managerial and organisational behaviour. Most important is the notion that the focal company is neutral for all the other operators, and willing to enhance and strengthen the collaboration with all the members in the IM network. This also means that all the accounts are aimed at being equal in terms of customer satisfaction. Besides, the adjustments intensify the adopted role. However, the focal company is also obliged tosustain its role as it still has a government-erected right to maintain solely the railway operations on domestic tracks. In addition, the roles of a dominator, principal, partner, subcontractor, and integrator were present appearing either in a dyadic relationship or in net(work) context. In order to reveal differentroles, a dualistic interpretation of the concept of role/position was employed.