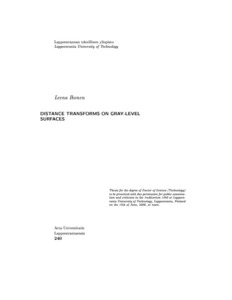 This thesis studies gray-level distance transforms, particularly the Distance Transform on Curved Space (DTOCS). The transform is produced by calculating distances on a gray-level surface. The DTOCS is improved by definingmore accurate local distances, and developing a faster transformation algorithm. The Optimal DTOCS enhances the locally Euclidean Weighted DTOCS (WDTOCS) with local distance coefficients, which minimize the maximum error from the Euclideandistance in the image plane, and produce more accurate global distance values.Convergence properties of the traditional mask operation, or sequential localtransformation, and the ordered propagation approach are analyzed, and compared to the new efficient priority pixel queue algorithm. The Route DTOCS algorithmdeveloped in this work can be used to find and visualize shortest routes between two points, or two point sets, along a varying height surface. In a digital image, there can be several paths sharing the same minimal length, and the Route DTOCS visualizes them all. A single optimal path can be extracted from the route set using a simple backtracking algorithm. A new extension of the priority pixel queue algorithm produces the nearest neighbor transform, or Voronoi or Dirichlet tessellation, simultaneously with the distance map. The transformation divides the image into regions so that each pixel belongs to the region surrounding the reference point, which is nearest according to the distance definition used. Applications and application ideas for the DTOCS and its extensions are presented, including obstacle avoidance, image compression and surface roughness evaluation.