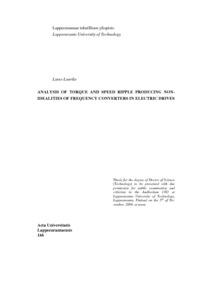 Electric motors driven by adjustable-frequency converters may produce periodic excitation forces that can cause torque and speed ripple. Interaction with the driven mechanical system may cause undesirable vibrations that affect the system performance and lifetime. Direct drives in sensitive applications, such as elevators or paper machines, emphasize the importance of smooth torque production. This thesis analyses the non-idealities of frequencyconverters that produce speed and torque ripple in electric drives. The origin of low order harmonics in speed and torque is examined. It is shown how different current measurement error types affect the torque. As the application environment, direct torque control (DTC) method is applied to permanent magnet synchronous machines (PMSM). A simulation model to analyse the effect of the frequency converter non-idealities on the performance of the electric drives is created. Themodel enables to identify potential problems causing torque vibrations and possibly damaging oscillations in electrically driven machine systems. The model is capable of coupling with separate simulation software of complex mechanical loads. Furthermore, the simulation model of the frequency converter's control algorithm can be applied to control a real frequency converter. A commercial frequencyconverter with standard software, a permanent magnet axial flux synchronous motor and a DC motor as the load are used to detect the effect of current measurement errors on load torque. A method to reduce the speed and torque ripple by compensating the current measurement errors is introduced. The method is based on analysing the amplitude of a selected harmonic component of speed as a function oftime and selecting a suitable compensation alternative for the current error. The speed can be either measured or estimated, so the compensation method is applicable also for speed sensorless drives. The proposed compensation method is tested with a laboratory drive, which consists of commercial frequency converter hardware with self-made software and a prototype PMSM. The speed and torque rippleof the test drive are reduced by applying the compensation method. In addition to the direct torque controlled PMSM drives, the compensation method can also beapplied to other motor types and control methods.