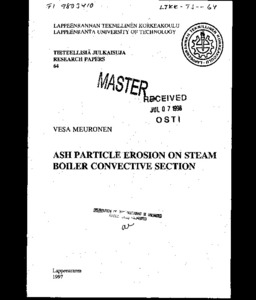 In this study, equations for the calculation of erosion wear caused by ash particles on convective heat exchanger tubes of steam boilers are presented. Anew, three-dimensional test arrangement was used in the testing of the erosion wear of convective heat exchanger tubes of steam boilers. When using the sleeve-method, three different tube materials and three tube constructions could be tested. New results were obtained from the analyses. The main mechanisms of erosionwear phenomena and erosion wear as a function of collision conditions and material properties have been studied. Properties of fossil fuels have also been presented. When burning solid fuels, such as pulverized coal and peat in steam boilers, most of the ash is entrained by the flue gas in the furnace. In bubbling andcirculating fluidized bed boilers, particle concentration in the flue gas is high because of bed material entrained in the flue gas. Hard particles, such as sharp edged quartz crystals, cause erosion wear when colliding on convective heat exchanger tubes and on the rear wall of the steam boiler. The most important ways to reduce erosion wear in steam boilers is to keep the velocity of the flue gas moderate and prevent channelling of the ash flow in a certain part of the cross section of the flue gas channel, especially near the back wall. One can do this by constructing the boiler with the following components. Screen plates can beused to make the velocity and ash flow distributions more even at the cross-section of the channel. Shield plates and plate type constructions in superheaters can also be used. Erosion testing was conducted with three types of tube constructions: a one tube row, an inline tube bank with six tube rows, and a staggered tube bank with six tube rows. Three flow velocities and two particle concentrations were used in the tests, which were carried out at room temperature. Three particle materials were used: quartz, coal ash and peat ash particles. Mass loss, diameter loss and wall thickness loss measurements of the test sleeves were taken. Erosion wear as a function of flow conditions, tube material and tube construction was analyzed by single-variable linear regression analysis. In developing the erosion wear calculation equations, multi-variable linear regression analysis was used. In the staggered tube bank, erosion wear had a maximum value in a tube row 2 and a local maximum in row 5. In rows 3, 4 and 6, the erosion rate was low. On the other hand, in the in-line tube bank the minimum erosion rate occurred in tube row 2 and in further rows the erosion had an increasing value, so that in a six row tube bank, the maximum value occurred in row 6.