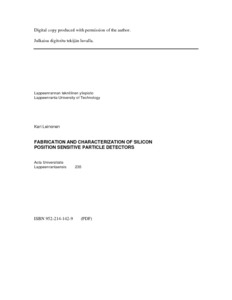 Position sensitive particle detectors are needed in high energy physics research. This thesis describes the development of fabrication processes and characterization techniques of silicon microstrip detectors used in the work for searching elementary particles in the European center for nuclear research, CERN. The detectors give an electrical signal along the particles trajectory after a collision in the particle accelerator. The trajectories give information about the nature of the particle in the struggle to reveal the structure of the matter and the universe. Detectors made of semiconductors have a better position resolution than conventional wire chamber detectors. Silicon semiconductor is overwhelmingly used as a detector material because of its cheapness and standard usage in integrated circuit industry.
After a short spread sheet analysis of the basic building block of radiation detectors, the pn junction, the operation of a silicon radiation detector is discussed in general. The microstrip detector is then introduced and the detailed structure of a double-sided ac-coupled strip detector revealed.
The fabrication aspects of strip detectors are discussedstarting from the process development and general principles ending up to the description of the double-sided ac-coupled strip detector process.
Recombination and generation lifetime measurements in radiation detectors are discussed shortly. The results of electrical tests, ie. measuring the leakage currents and bias resistors, are displayed. The beam test setups and the results, the signal to noise ratio and the position accuracy, are then described.
It was found out in earlier research that a heavy irradiation changes the properties of radiation detectors dramatically. A scanning electron microscope method was developed to measure the electric potential and field inside irradiated detectorsto see how a high radiation fluence changes them. The method and the most important results are discussed shortly.