Mass transfer and particleinteractions in granular systems and suspension flows 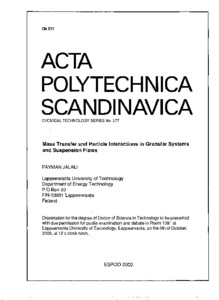 The purpose of this study was to investigate some important features of granular flows and suspension flows by computational simulation methods. Granular materials have been considered as an independent state ofmatter because of their complex behaviors. They sometimes behave like a solid, sometimes like a fluid, and sometimes can contain both phases in equilibrium. The computer simulation of dense shear granular flows of monodisperse, spherical particles shows that the collisional model of contacts yields the coexistence of solid and fluid phases while the frictional model represents a uniform flow of fluid phase. However, a comparison between the stress signals from the simulations and experiments revealed that the collisional model would result a proper match with the experimental evidences. Although the effect of gravity is found to beimportant in sedimentation of solid part, the stick-slip behavior associated with the collisional model looks more similar to that of experiments. The mathematical formulations based on the kinetic theory have been derived for the moderatesolid volume fractions with the assumption of the homogeneity of flow. In orderto make some simulations which can provide such an ideal flow, the simulation of unbounded granular shear flows was performed. Therefore, the homogeneous flow properties could be achieved in the moderate solid volume fractions. A new algorithm, namely the nonequilibrium approach was introduced to show the features of self-diffusion in the granular flows. Using this algorithm a one way flow can beextracted from the entire flow, which not only provides a straightforward calculation of self-diffusion coefficient but also can qualitatively determine the deviation of self-diffusion from the linear law at some regions nearby the wall inbounded flows. Anyhow, the average lateral self-diffusion coefficient, which was calculated by the aforementioned method, showed a desirable agreement with thepredictions of kinetic theory formulation. In the continuation of computer simulation of shear granular flows, some numerical and theoretical investigations were carried out on mass transfer and particle interactions in particulate flows. In this context, the boundary element method and its combination with the spectral method using the special capabilities of wavelets have been introduced as theefficient numerical methods to solve the governing equations of mass transfer in particulate flows. A theoretical formulation of fluid dispersivity in suspension flows revealed that the fluid dispersivity depends upon the fluid properties and particle parameters as well as the fluid-particle and particle-particle interactions.