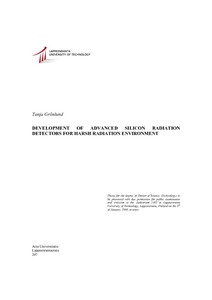 This thesis describes the development of advanced silicon radiation detectors and their characterization by simulations, used in the work for searching elementary particles in the European Organization for Nuclear Research, CERN. Silicon particle detectors will face extremely harsh radiation in the proposed upgrade of the Large Hadron Collider, the future high-energy physics experiment Super-LHC. The increase in the maximal fluence and the beam luminosity up to 1016 neq / cm2 and 1035 cm-2s-1 will require detectors with a dramatic improvement in radiation hardness, when such a fluence will be far beyond the operational limits of the present silicon detectors.
The main goals of detector development concentrate on minimizing the radiation degradation. This study contributes mainly to the device engineering technology for developing more radiation hard particle detectors with better characteristics. Also the defect engineering technology is discussed.
In the nearest region of the beam in Super-LHC, the only detector choice is 3D detectors, or alternatively replacing other types of detectors every two years. The interest in the 3D silicon detectors is continuously growing because of their many advantages as compared to conventional planar detectors: the devices can be fully depleted at low bias voltages, the speed of the charge collection is high, and the collection distances are about one order of magnitude less than those of planar technology strip and pixel detectors with electrodes limited to the detector surface. Also the 3D detectors exhibit high radiation tolerance, and thus the ability of the silicon detectors to operate after irradiation is increased.
Two parameters, full depletion voltage and electric field distribution, is discussed in more detail in this study. The full depletion of the detector is important because the only depleted area in the detector is active for the particle tracking. Similarly, the high electric field in the detector makes the detector volume sensitive, while low-field areas are non-sensitive to particles. This study shows the simulation results of full depletion voltage and the electric field distribution for the various types of 3D detectors.
First, the 3D detector with the n-type substrate and partial-penetrating p-type electrodes are researched. A detector of this type has a low electric field on the pixel side and it suffers from type inversion. Next, the substrate is changed to p-type and the detectors having electrodes with one doping type and the dual doping type are examined. The electric field profile in a dual-column 3D Si detector is more uniform than that in the single-type column 3D detector. The dual-column detectors are the best in radiation hardness because of their low depletion voltages and short drift distances.