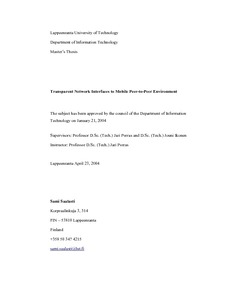 The fact that most of new Personal Data Assistant (PDA) devices and smartphones have the ability to communicate via different wireless technologies has made several new applications possible. While traditional network model is based on the idea of static hosts, mobile devices can create decentralized, self-organizing ad-hoc networks and act as peers in the network. This kind of adapting network is suitable for mobile devices which can freely join and leave the networks. Because several different wireless communication technologies are involved, flexible changing of the networking technology must be handled in order to enable seamless communication between these networks.