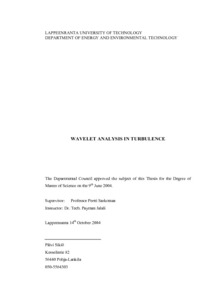 The first section generally introduces wavelets and wavelet transforms as a mathematical tool. Moreover, the basic properties of turbulence are discussed and classical methods for modeling turbulent flows are explained. Wavelets are implemented to model the turbulence as well as to analyze turbulent signals.

The model studied here is the GOY (Gledzer 1973, Ohkitani & Yamada 1989) shell model of turbulence, which is a popular model for explaining intermittency based on the cascade of kinetic energy. The goal is to introduce better quantification method for intermittency obtained in a shell model. Wavelets are localized in both space (time) and scale, therefore, they are suitable candidates for the study of singular bursts, that interrupt the calm periods of an energy flow through various scales. The study concerns two questions, namely the frequency of the occurrence as well as the intensity of the singular bursts at various Reynolds numbers.

The results gave an insight that singularities become more local as Reynolds number increases. The singularities become more local also when the shell number is increased at certain Reynolds number. The study revealed that the singular bursts are more frequent at Re ~ 107 than other cases with lower Re. The intermittency of bursts for the cases with Re ~ 106 and Re ~ 105 was similar, but for the case with Re ~ 104 bursts occured after long waiting time in a different fashion so that it could not be scaled with higher Re.