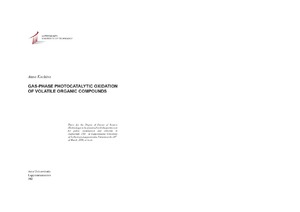 Substances emitted into the atmosphere by human activities in urban and industrial areas cause environmental problems such as air quality degradation, respiratory diseases, climate change, global warming, and stratospheric ozone depletion. Volatile organic compounds (VOCs) are major air pollutants, emitted largely by industry, transportation and households. Many VOCs are toxic, and some are considered to be carcinogenic, mutagenic, or teratogenic. A wide spectrum of VOCs is readily oxidized photocatalytically. Photocatalytic oxidation (PCO) over titanium dioxide may present a potential alternative to air treatment strategies currently in use, such as adsorption and thermal treatment, due to its advantageous activity under ambient conditions, although higher but still mild temperatures may also be applied. The objective of the present research was to disclose routes of chemical reactions, estimate the kinetics and the sensitivity of gas-phase PCO to reaction conditions in respect of air pollutants containing heteroatoms in their molecules. Deactivation of the photocatalyst and restoration of its activity was also taken under consideration to assess the practical possibility of the application of PCO to the treatment of air polluted with VOCs. UV-irradiated titanium dioxide was selected as a photocatalyst for its chemical inertness, non-toxic character and low cost. In the present work Degussa P25 TiO2 photocatalyst was mostly used. In transient studies platinized TiO2 was also studied. The experimental research into PCO of following VOCs was undertaken: - methyl tert-butyl ether (MTBE) as the basic oxygenated motor fuel additive and, thus, a major non-biodegradable pollutant of groundwater; - tert-butyl alcohol (TBA) as the primary product of MTBE hydrolysis and PCO; - ethyl mercaptan (ethanethiol) as one of the reduced sulphur pungent air pollutants in the pulp-and-paper industry; - methylamine (MA) and dimethylamine (DMA) as the amino compounds often emitted by various industries. The PCO of VOCs was studied using a continuous-flow mode. The PCO of MTBE and TBA was also studied by transient mode, in which carbon dioxide, water, and acetone were identified as the main gas-phase products. The volatile products of thermal catalytic oxidation (TCO) of MTBE included 2-methyl-1-propene (2-MP), carbon monoxide, carbon dioxide and water; TBA decomposed to 2-MP and water. Continuous PCO of 4 TBA proceeded faster in humid air than dry air. MTBE oxidation, however, was less sensitive to humidity. The TiO2 catalyst was stable during continuous PCO of MTBE and TBA above 373 K, but gradually lost activity below 373 K; the catalyst could be regenerated by UV irradiation in the absence of gas-phase VOCs. Sulphur dioxide, carbon monoxide, carbon dioxide and water were identified as ultimate products of PCO of ethanethiol. Acetic acid was identified as a photocatalytic oxidation by-product. The limits of ethanethiol concentration and temperature, at which the reactor performance was stable for indefinite time, were established. The apparent reaction kinetics appeared to be independent of the reaction temperature within the studied limits, 373 to 453 K. The catalyst was completely and irreversibly deactivated with ethanethiol TCO. Volatile PCO products of MA included ammonia, nitrogen dioxide, nitrous oxide, carbon dioxide and water. Formamide was observed among DMA PCO products together with others similar to the ones of MA. TCO for both substances resulted in the formation of ammonia, hydrogen cyanide, carbon monoxide, carbon dioxide and water. No deactivation of the photocatalyst during the multiple long-run experiments was observed at the concentrations and temperatures used in the study. PCO of MA was also studied in the aqueous phase. Maximum efficiency was achieved in an alkaline media, where MA exhibited high fugitivity. Two mechanisms of aqueous PCO – decomposition to formate and ammonia, and oxidation of organic nitrogen directly to nitrite - lead ultimately to carbon dioxide, water, ammonia and nitrate: formate and nitrite were observed as intermediates. A part of the ammonia formed in the reaction was oxidized to nitrite and nitrate. This finding helped in better understanding of the gasphase PCO pathways. The PCO kinetic data for VOCs fitted well to the monomolecular Langmuir- Hinshelwood (L-H) model, whereas TCO kinetic behaviour matched the first order process for volatile amines and the L-H model for others. It should be noted that both LH and the first order equations were only the data fit, not the real description of the reaction kinetics. The dependence of the kinetic constants on temperature was established in the form of an Arrhenius equation.