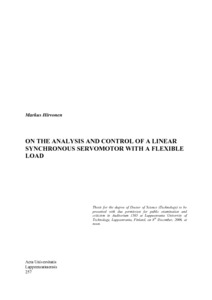 Industry's growing need for higher productivity is placing new demands on mechanisms connected with electrical motors, because these can easily lead to vibration problems due to fast dynamics. Furthermore, the nonlinear effects caused by a motor frequently reduce servo stability, which diminishes the controller's ability to predict and maintain speed. Hence, the flexibility of a mechanism and its control has become an important area of research. The basic approach in control system engineering is to assume that the mechanism connected to a motor is rigid, so that vibrations in the tool mechanism, reel, gripper or any apparatus connected to the motor are not taken into account. This might reduce the ability of the machine system to carry out its assignment and shorten the lifetime of the equipment. Nonetheless, it is usually more important to know how the mechanism, or in other words the load on the motor, behaves.
A nonlinear load control method for a permanent magnet linear synchronous motor is developed and implemented in the thesis. The purpose of the controller is to track a flexible load to the desired velocity reference as fast as possible and without awkward oscillations.
The control method is based on an adaptive backstepping algorithm with its stability ensured by the Lyapunov stability theorem. As a reference controller for the backstepping method, a hybrid neural controller is introduced in which the linear motor itself is controlled by a conventional PI velocity controller and the vibration of the associated flexible mechanism is suppressed from an outer control loop using a compensation signal from a multilayer perceptron network. To avoid the local minimum problem entailed in neural networks, the initial weights are searched for offline by means of a differential evolution algorithm. The states of a mechanical system for controllers are estimated using the Kalman filter.
The theoretical results obtained from the control design are validated with the lumped mass model for a mechanism. Generalization of the mechanism allows the methods derived here to be widely implemented in machine automation. The control algorithms are first designed in a specially introduced nonlinear simulation model and then implemented in the physical linear motor using a DSP (Digital Signal Processor) application. The measurements prove that both controllers are capable of suppressing vibration, but that the backstepping method is superior to others due to its accuracy of response and stability properties.