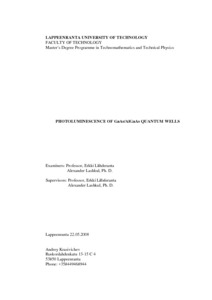 In this thesis is studied the influence of uniaxial deformation of GaAs/AlGaAs quantum well structures to photoluminescence. Uniaxial deformation was applied along [110] and polarization ratio of photoluminescence at T = 77 K and 300 K was measured. Also the physical origin of photoluminescence lines in spectrum was determined and the energy band splitting value between states of heavy and light holes was estimated.
It was found that the dependencies of polarization ratio on uniaxial deformation for bulk GaAs and GaAs/AlGaAs are different. Two observed lines in photoluminescence spectrum are induced by free electron recombination to energy sublevels of valence band corresponding to heavy and light holes. Those sublevels are splited due to the combination of size quantization and external pressure. The quantum splitting energy value was estimated. Also was shown a method, which allows to determine the energy splitting value of sublevels at room temperature and at comparatively low uniaxial deformation, when the other method for determining of the splitting becomes impossible.