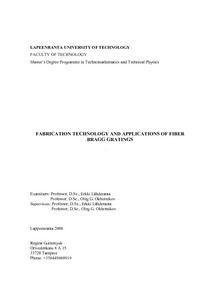 In this thesis theoretical and technological aspects of fiber Bragg gratings (FBG) are considered. The fabrication of uniform and chirped fiber Bragg gratings using phase mask technique has been exploited throughout this study. Different requires of FBG inscription were considered and implemented experimentally to find economical and effective procedure. The hydrogen loading was used as a method for enhancement the photosensitivity of the fiber. The minimum loading time for uniform and chirped fiber Bragg gratings was determined as 3 days and 7 days at T = 50°C and hydrogen pressure 140 bar, respectively.
The post-inscription annealing was considered to avoid excess losses induced by the hydrogen. The wavelength evolution during annealing was measured.
The strain and temperature sensor application of FBG was considered. The wavelength shifts caused by tension and temperature were studied for both uniform and chirp fiber Bragg gratings.