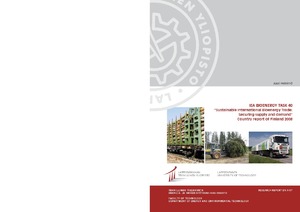 This study considered the current situation of biofuels markets in Finland. The fact that industry consumes more than half of the total primary energy, widely applied combined heat and power production and a high share of solid biomass fuels in the total energy consumption are specific to the Finnish energy system. Wood is the most important source of bioenergy in Finland, representing 21% of the total energy consumption in 2006. Almost 80% of the wood-based energy is recovered from industrial by-products and residues. Finland has commitment itself to maintaining its greenhouse gas emissions at the 1990 level, at the highest, during the period 2008–2012. The energy and climate policy carried out in recent years has been based on the National Energy and Climate introduced in 2005. The Finnish energy policy aims to achieve the target, and a variety of measures are taken to promote the use of renewable energy sources and especially wood fuels. In 2007, the government started to prepare a new long-term (up to the year 2050) climate and energy strategy that will meet EU’s new targets for the reduction of green house gas emissions and the promotion of renewable energy sources. The new strategy will be introduced during 2008. The international biofuels trade has a substantial importance for the utilisation of bioenergy in Finland. In 2006, the total international trading of solid and liquid biofuels was approximately 64 PJ of which import was 61 PJ. Most of the import is indirect and takes place within the forest industry’s raw wood imports. In 2006, as much as 24% of wood energy was based on foreignorigin wood. Wood pellets and tall oil form the majority of export streams of biofuels. The indirect import of wood fuels increased almost 10% in 2004–2006, while the direct trade of solid and liquid biofuels has been almost constant.