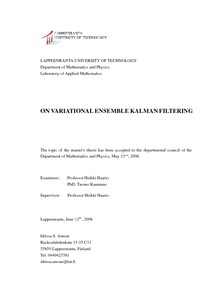 The Extended Kalman Filter (EKF) and four dimensional assimilation variational method (4D-VAR) are both advanced data assimilation methods. The EKF is impractical in large scale problems and 4D-VAR needs much effort in building the adjoint model. In this work we have formulated a data assimilation method that will tackle the above difficulties. The method will be later called the Variational Ensemble Kalman Filter (VEnKF). The method has been tested with the Lorenz95 model. Data has been simulated from the solution of the Lorenz95 equation with normally distributed noise. Two experiments have been conducted, first with full observations and the other one with partial observations. In each experiment we assimilate data with three-hour and six-hour time windows. Different ensemble sizes have been tested to examine the method. There is no strong difference between the results shown by the two time windows in either experiment. Experiment I gave similar results for all ensemble sizes tested while in experiment II, higher ensembles produce better results. In experiment I, a small ensemble size was enough to produce nice results while in experiment II the size had to be larger. Computational speed is not as good as we would want. The use of the Limited memory BFGS method instead of the current BFGS method might improve this. The method has proven succesful. Even if, it is unable to match the quality of analyses of EKF, it attains significant skill in forecasts ensuing from the analysis it has produced. It has two advantages over EKF; VEnKF does not require an adjoint model and it can be easily parallelized.