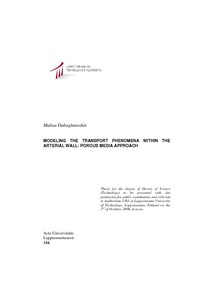 The transport of macromolecules, such as low-density lipoprotein (LDL), and their accumulation in the layers of the arterial wall play a critical role in the creation and development of atherosclerosis. Atherosclerosis is a disease of large arteries e.g., the aorta, coronary, carotid, and other proximal arteries that involves a distinctive accumulation of LDL and other lipid-bearing materials in the arterial wall. Over time, plaque hardens and narrows the arteries. The flow of oxygen-rich blood to organs and other parts of the body is reduced. This can lead to serious problems, including heart attack, stroke, or even death. It has been proven that the accumulation of macromolecules in the arterial wall depends not only on the ease with which materials enter the wall, but also on the hindrance to the passage of materials out of the wall posed by underlying layers. Therefore, attention was drawn to the fact that the wall structure of large arteries is different than other vessels which are disease-resistant. Atherosclerosis tends to be localized in regions of curvature and branching in arteries where fluid shear stress (shear rate) and other fluid mechanical characteristics deviate from their normal spatial and temporal distribution patterns in straight vessels. On the other hand, the smooth muscle cells (SMCs) residing in the media layer of the arterial wall respond to mechanical stimuli, such as shear stress. Shear stress may affect SMC proliferation and migration from the media layer to intima. This occurs in atherosclerosis and intimal hyperplasia. The study of blood flow and other body fluids and of heat transport through the arterial wall is one of the advanced applications of porous media in recent years. The arterial wall may be modeled in both macroscopic (as a continuous porous medium) and microscopic scales (as a heterogeneous porous medium). In the present study, the governing equations of mass, heat and momentum transport have been solved for different species and interstitial fluid within the arterial wall by means of computational fluid dynamics (CFD). Simulation models are based on the finite element (FE) and finite volume (FV) methods. The wall structure has been modeled by assuming the wall layers as porous media with different properties. In order to study the heat transport through human tissues, the simulations have been carried out for a non-homogeneous model of porous media. The tissue is composed of blood vessels, cells, and an interstitium. The interstitium consists of interstitial fluid and extracellular fibers. Numerical simulations are performed in a two-dimensional (2D) model to realize the effect of the shape and configuration of the discrete phase on the convective and conductive features of heat transfer, e.g. the interstitium of biological tissues. On the other hand, the governing equations of momentum and mass transport have been solved in the heterogeneous porous media model of the media layer, which has a major role in the transport and accumulation of solutes across the arterial wall. The transport of Adenosine 5´-triphosphate (ATP) is simulated across the media layer as a benchmark to observe how SMCs affect on the species mass transport. In addition, the transport of interstitial fluid has been simulated while the deformation of the media layer (due to high blood pressure) and its constituents such as SMCs are also involved in the model. In this context, the effect of pressure variation on shear stress is investigated over SMCs induced by the interstitial flow both in 2D and three-dimensional (3D) geometries for the media layer. The influence of hypertension (high pressure) on the transport of lowdensity lipoprotein (LDL) through deformable arterial wall layers is also studied. This is due to the pressure-driven convective flow across the arterial wall. The intima and media layers are assumed as homogeneous porous media. The results of the present study reveal that ATP concentration over the surface of SMCs and within the bulk of the media layer is significantly dependent on the distribution of cells. Moreover, the shear stress magnitude and distribution over the SMC surface are affected by transmural pressure and the deformation of the media layer of the aorta wall. This work reflects the fact that the second or even subsequent layers of SMCs may bear shear stresses of the same order of magnitude as the first layer does if cells are arranged in an arbitrary manner. This study has brought new insights into the simulation of the arterial wall, as the previous simplifications have been ignored. The configurations of SMCs used here with elliptic cross sections of SMCs closely resemble the physiological conditions of cells. Moreover, the deformation of SMCs with high transmural pressure which follows the media layer compaction has been studied for the first time. On the other hand, results demonstrate that LDL concentration through the intima and media layers changes significantly as wall layers compress with transmural pressure. It was also noticed that the fraction of leaky junctions across the endothelial cells and the area fraction of fenestral pores over the internal elastic lamina affect the LDL distribution dramatically through the thoracic aorta wall. The simulation techniques introduced in this work can also trigger new ideas for simulating porous media involved in any biomedical, biomechanical, chemical, and environmental engineering applications.