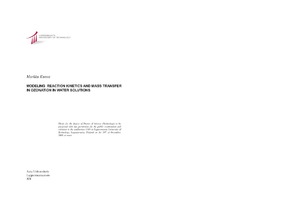 This dissertation is based on four articles dealing with modeling of ozonation. The literature part of this considers some models for hydrodynamics in bubble column simulation. A literature review of methods for obtaining mass transfer coefficients is presented. The methods presented to obtain mass transfer are general models and can be applied to any gas-liquid system. Ozonation reaction models and methods for obtaining stoichiometric coefficients and reaction rate coefficients for ozonation reactions are discussed in the final section of the literature part. In the first article, ozone gas-liquid mass transfer into water in a bubble column was investigated for different pH values. A more general method for estimation of mass transfer and Henry’s coefficient was developed from the Beltrán method. The ozone volumetric mass transfer coefficient and the Henry’s coefficient were determined simultaneously by parameter estimation using a nonlinear optimization method. A minor dependence of the Henry’s law constant on pH was detected at the pH range 4 - 9. In the second article, a new method using the axial dispersion model for estimation of ozone self-decomposition kinetics in a semi-batch bubble column reactor was developed. The reaction rate coefficients for literature equations of ozone decomposition and the gas phase dispersion coefficient were estimated and compared with the literature data. The reaction order in the pH range 7-10 with respect to ozone 1.12 and 0.51 the hydroxyl ion were obtained, which is in good agreement with literature. The model parameters were determined by parameter estimation using a nonlinear optimization method. Sensitivity analysis was conducted using object function method to obtain information about the reliability and identifiability of the estimated parameters. In the third article, the reaction rate coefficients and the stoichiometric coefficients in the reaction of ozone with the model component p-nitrophenol were estimated at low pH of water using nonlinear optimization. A novel method for estimation of multireaction model parameters in ozonation was developed. In this method the concentration of unknown intermediate compounds is presented as a residual COD (chemical oxygen demand) calculated from the measured COD and the theoretical COD for the known species. The decomposition rate of p-nitrophenol on the pathway producing hydroquinone was found to be about two times faster than the p-nitrophenol decomposition rate on the pathway producing 4- nitrocatechol. In the fourth article, the reaction kinetics of p-nitrophenol ozonation was studied in a bubble column at pH 2. Using the new reaction kinetic model presented in the previous article, the reaction kinetic parameters, rate coefficients, and stoichiometric coefficients as well as the mass transfer coefficient were estimated with nonlinear estimation. The decomposition rate of pnitrophenol was found to be equal both on the pathway producing hydroquinone and on the path way producing 4-nitrocathecol. Comparison of the rate coefficients with the case at initial pH 5 indicates that the p-nitrophenol degradation producing 4- nitrocathecol is more selective towards molecular ozone than the reaction producing hydroquinone. The identifiability and reliability of the estimated parameters were analyzed with the Marcov chain Monte Carlo (MCMC) method. @All rights reserved. No part of the publication may be reproduced, stored in a retrieval system, or transmitted, in any form or by any means, electronic, mechanical, photocopying, recording, or otherwise, without the prior permission of the author.